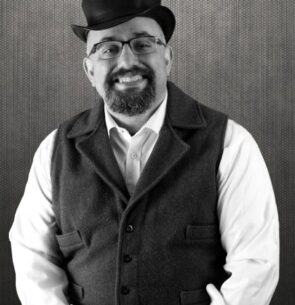 Joshua Marpet is an ex-cop, ex-fireman, and ex-historical blacksmith.  He has been in IT and Infosec since the 90’s.  His first formal security job was at the Federal Reserve Bank of Philadelphia as a senior information security engineer.

He is a graduate of MACH37™, the top cybersecurity start-up accelerator designed to facilitate the creation of the next generation of cyber product companies.

Josh was second in command of security for all nine years of Derbycon, an information security conference held in Louisville KY, that began in 2010 and ended in 2019.

He’s also a former adjunct instructor at various universities, including Wilmington University, and a former board member of Hackers for Charity, security expert hackers who use their “superpowers” to make the world a better place through projects and acts of service.

Josh is the co-founder and current chief operating officer of Red Lion, a boutique firm that specializes in the ability to see around corners and tackle information security and compliance issues for any size business. He is also a current faculty member for IANS, the Institute for Applied Network Security, as well as for the MIS Training Institute (MISTI), the international leader in audit and information security training. Josh just started a new nonprofit, the RM-ISAO, a trade association to help small and medium government contractors be secure and compliant in a way that they can afford and operate effectively.

Josh is the author of a patent-pending invention around blockchain and forensic files. And, finally, when he’s not spending his remaining time with his wife and child, he squeezes in some time to sleep.